Or roughly that–people might be in long term, caring (even loving, romantic) relationships with other couples, member with different primary relationship structures, or single people but you didn’t refer to or think of partners outside of your primary dynamic as “partners” in the same social sense. That’s not good or bad compared to most polyam I’ve been around or in—just a difference.

So the first time I engaged in a traditionally recognizable polyam relationship of my own, I think I missed a lot of red flags and incompatibilities because of that partner’s insistence that I was “new” at “meaningful” non-monogamy even though I’d been active in non-traditional lifestyles for almost 15 years myself.

When I wanted to have a conversation about levels of involvement, time expectations, and boundaries with other partners—weeks after we started sleeping together and it was clear we were becoming emotionally involved—the phrase he used was that I was trying to “exert control” over things and he was used to “letting things find their own level.”

But he insisted—even in his OKCupid profile, which he sent me unbidden—that he was good at relationship communication (“at the risk of sounding like a Nice Guy(tm)”) so I took that at fairly face value; that he’d respond to checking in on our “levels” like I would.

I feel like I became a convenient scapegoat for problems in his other relationships because I was farther away. I know for a fact there were instances where if he didn’t outright lie to absolve his responsibility of autonomy, he either attempted to or successfully controlled the flow of information between his partners to avoid his own actions or decisions. I mean, I can armchair people to death and it won’t matter but I feel like he avoided difficult feelings or situations while simultaneously building his sense of self on being “good” at handling them.

Everyone was always acting upon him, preventing him from taking action; and god knows what he might have told me about his other past or current partners that was either a lie, an exaggeration, or such a severe narcissistic misperception as to be upsetting in retrospect. I’ve been lucky–in a way–to have had parts of my experience verified by people I would not have expected.

So much of my professional and personal confidence was gutted by someone who claimed to be a self-appointed “mentor to women” despite both casual and overt sexism; he frequently referred to me as a “colleague” though he assumed the lone and language of “showing me the ropes” rather than talking shop or acknowledging our different knowledge bases in practice.

This started in very late 2017; I had always had my independent career goals, network, and songwriting. I wrote almost no new songs or parodies while I was with David for a lot of reasons, but one of them was negging and intimidation. He commented frequently on my “simple” songwriting and contrasted it with how he “couldn’t write a pop song with fewer than seven chords,” or how he disdained experimentation or song writing practice. That’s just the surface.

It’s sad, and I don’t think it was intentional. I think he is deeply insecure, traumatized, and nuanced but there was comfort in knowing I wasn’t the only one with these experiences. A think I’ve spent time (and still spend time) sorting in therapy are the ways I wrongly doubted myself and the ways I could have shown more empathy or confronted our different experiences in practice.

But–charitable human stuff aside–he made me feel like absolute shit on a bunch of levels and was privately hostile toward me while being publicly supportive during the investigation against my abuser.

He also responded to a comment thread I made on another friend’s post that he “wasn’t going to demand forgiveness” for overtly misogynistic comments about the intersection of my body and my music, though he directed all that discussion specifically to other people rather me. I felt he was co-opting the language of mental health (ie “no one owes me forgiveness”) to avoid having to make any kind of apology in the first place.

I don’t even know what I would want; I’ve learned enough that I’m not sure I’d find an apology at this point anything but hollow, and I acknowledge that. That said, I also want to be able to run into him at professional event without being afraid of his verbal retaliation. I’ve had time to sit with what’s a reasonable fear and what isn’t–especially given that the last time we spoke was right after Jordan had been charged. Frankly, I see that he weaponized that and other details of my abuse against me in ways I was right to find scary, and still do.

Regardless, I feel I made a good faith, documented attempt to resolve professional issues with David before he made the “tits and ass” comments. He’s the only person who’s ever been asked to leave the Social Justice Bards roster, and I’m not the only reason for that. I am not aware of any attempts on his part toward de-escalation.

I’m tired of feeling like I can’t speak up about this more publicly because he was a former partner and I’m acutely aware of how much easier it is–from both sides–to live with the dissonance that what happened to someone is *real* but also maintain a relationship with the other person socially or professionally.

As for me, I don’t want to continue professional associations where I promote him but I don’t have strong opinions on people that do–partially because I recognize the realities of networking, friendships, and regional associations. There’s no hill to die on here. I’m happy to talk about my professional interactions with him (both positive and negative) but I generally reserve the very personal for relevant parties or close friends.

Anyway I wrote a bunch of songs about it, like, “Shake and Sweat” from FAWM this year.

This one is called “Peril on the Sea,” loosely inspired by the hymn and a recent breakup! I’m really happy with the song!

See the FAWM entry or below for lyrics and chords!

New for MarsCon 2020: Metricula and David Tyberg, on stage together! 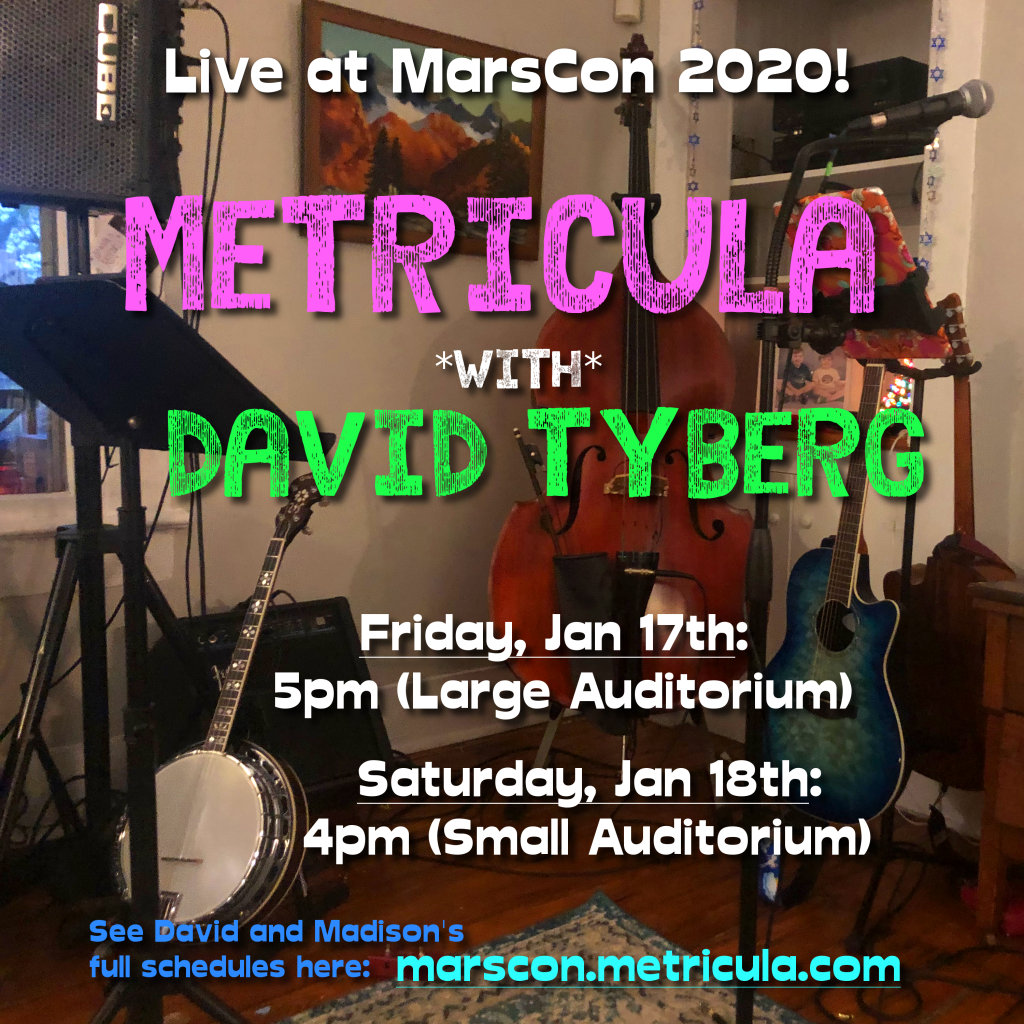