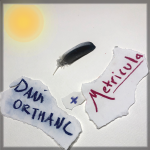 My newest Dani Orthanc track is “Seagulls,” out free now!

It’s inspired by one of my favorite albums, Far Away Trains Passing By by Ulrich Schnauss. I was trying to communicate the wistful, sad, and open feeling I get when I sat under a pier to watch the ocean at dusk. Like, when the sand is still warm from the sun but you feel the air start to blow thick and chilly even though it’s technically still 80 degrees outside. You have to go home soon, but not yet.